TUTORIAL: Clothing Subsets - How to NAME, ADD & USE them


A subset or mesh group is when your mesh is divided into separate groups which each can take on their own texture and material definitions. When you open your package in Sim PE, these are listed towards the bottom of your Property Set: 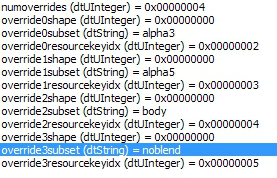 "numoverrides" declares the number of subsets in your mesh (0x0000000X) and each subset needs its own "overrideXshape", "overrideXsubset" (the name of your subset) and "overrideXresourcekeyidx" property.

THE BASICS:
The typical clothing mesh only has one subset: "body" for fullmeshes, "top" for top meshes, and "bottom" for bottom meshes (duh).

The most important thing is that the name under "overrideXsubset" matches the name that you put in your mesh comments. You can name them anything, as long as they match. However, it's good to use a standardized naming system to make things easier on yourself when making new meshes. If you name all your tops "noblend", you'll know to just clone any of your old tops for a new recolor file to hook up to your new mesh. If you name them random things, you'll have to go in editing the subset names and regenerating TXMTs all the time.

ADDING SUBSETS: Let's say you've added new subsets to a mesh, but the package you've cloned only has one group ("body"). It's easiest to clone your recolor from something that already has the right number, but it's not difficult to generate TXMTs for those new groups if you need to:


WHEN (AND WHEN NOT) TO USE SUBSETS:
You need more than one subset for clothing when:

"TOP" SUBSETS: Most longer top meshes have both a "top" layer and a "noblend" (or "top2" or whatever) subset to keep the textures from overlapping. In most cases, this is uneccessary. The only time you need a separate "top" group is if you are making a layerable jacket (or crop top, corset etc), in which case the undershirt subset that goes underneath the "bottom" textures should be named "top". The subset of the mesh that does not go underneath needs a different name, such as "noblend"

If your top mesh does not need to be layered, keep everything in one group and change the "overrideXsubset" name from "top" to "noblend" (or whatever you want) in your mesh comments and GZPS. However, since there are a lot of extraneous blank "top" subsets already around, it's easiest to just turn them into null groups.

Never name a top and bottom the same thing or you'll get texture conflicts when used together. For this reason, you should never name bottoms "noblend" or "body", since a lot of tops are named the former and Maxis has named a few separates the latter. If I don't want a bottom to have any texture overlap over tops (because I'm too lazy to edit the UV map :P), I always name it something like "shorts", "skirt", or "pants", which are not likely to share names with tops.

ALPHA SUBSETS:
These are subsets that can be made transparent, like a skirt or sleeve, or have pieces cut out that would be too intricate to mesh, such as lace, fringe, or a ripped hemline. These usually have two subsets, a front and back, so it's not just a gaping hole into nothingness underneath. Maxis usually names them "body_alpha3" and "body_alpha5", probably to make it easier to repository. You need to edit the TXMT for these subsets, so that the type is "SimStandardMaterial", with stdMatAlphaTestEnabled 1 in the properties, and stdMatAlphaBlendMode blend if you want transparency. You also will need to change the opacity of your mesh comments to make the transparency display properly. (default opacity is -1, inside the alpha it should be 0 and the outside should be 1)

REFLECTION SUBSETS:
Sometimes you'll see outfits that have shiny parts on them, like the Unsavory Charlatan's shoes, rubber boots on the rain slickers, or this TF outfit. In those cases, the shiny parts of the mesh have their own subset with a shiny TXMT while the non-shiny parts are the solid "body" layer. Maxis typically names these groups "reflection".

WHEN IS A SUBSET NOT A SUBSET?

When two of them have the same name! If you name two milkshape groups the same thing, they'll act as one subset and share a TXTR/TXMT. If you're swapping shoes or arms or things, you don't always need to regroup everything! When you regroup, you have to redo morphs. Instead add on the piece that you need, give it the same name, and remove the morph references. (shoes and wrists don't need morphs!)

AWESOME THINGS YOU CAN DO WITH SUBSETS:
Something that comes in handy with subsets, is that through repositorying you can create more variation with less textures. (the most "fattening" part of a package) For example, with the amhairponybandana Maxis hair, the hair and the bandana are made up of separate subsets:

Note that there are 5 different colors of bandana, and 5 hair colors (black, brown, blonde, red, and grey) Instead of making 4 textures for each of the 5 colors (20 textures = a bazillion MB!) Maxis simply made 5 textures, and repositoried the remaining 15 files to the different colors. (bandana-green/hair-blonde, bandana- red/hair-blonde, bandana-blue/hair-blonde and so on and so forth) This is also how the Maxis sewing machine outfits work. They made the full outfit in red, blue, yellow and such, then let you pick which one each subset pulls textures from!

Here's some other examples of how you can use this: